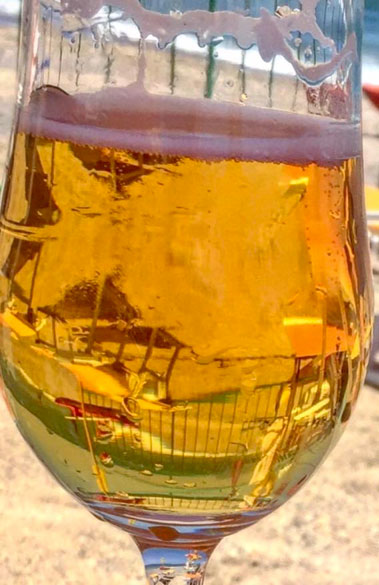 When I saw this picture posted on social media by my friend Franca, I immediately got the sense of where she was – both literally as well as metaphorically. The picture itself, together with what was reflected back on the glass, revealed evidence of the life around her and “painted” a clear picture –beach, relaxation, sunshine.

When I think of my clients, particularly in stressful or busy times, I realize that it is so easy to lose sense of the “picture” of who we are – what picture are we painting with our lives? Or, more specifically, what picture are the pieces of our lives reflecting back at the world? What are others seeing? Because, after all, even though we tend to judge others on their actions (i.e. what we observe), we judge ourselves on our intentions (what we planned in our heads). And therein lies the problem: we don’t often have or take the time to truly look at what we’re actually doing, to observe our behavior. Instead, we rely on our impressions, which are formed in our minds by our intentions. The result is that the idea we have in our heads doesn’t often match what is really out there in the world.

A client once told me that he tried to spend as much time as his schedule allowed with his direct reports, having “free flowing” conversations, in order to build stronger personal rapport with his team. For him, because he really wanted to and intended to connect with his folks, he thought he was making a big effort towards this goal. However, when we actually analyzed at how he spent his days, we saw that while he often started the day with the intention of spending time with people, the usual time constraints, tasks and emergencies took over and what actuallyhappened (what was reflected back, what was seen by others) was that he rushed crazily through his days, having hurried and very transactional conversations with people. The result was the opposite of his intentions: people perceived him as being only a “bottom line” leader – caring only about getting the task done quickly, and much less about his people.

Misalignment of intent and actions can be hard to perceive, particularly if you are someone who tends to “live inside your head”. Being aware of what is actually taking place around you, observing your behavior and its impact on others, takes time and focus, two elements which seems to be getting increasingly squeezed out in our lives.

So here is my summer invitation for you: How about spending some time observing (non-judgmentally, of course!) and reflecting on what the slivers of your life reveal to the world. What picture are they painting? What do they say about you? Are they aligned with your Purpose? I am doing the same – maybe we can share notes after the summer.

It is only when intent and actions begin to align, that you start to be authentic. And when they are aligned consistently, you start to become more centered and grounded.

All the best for a reflective and energizing summer!